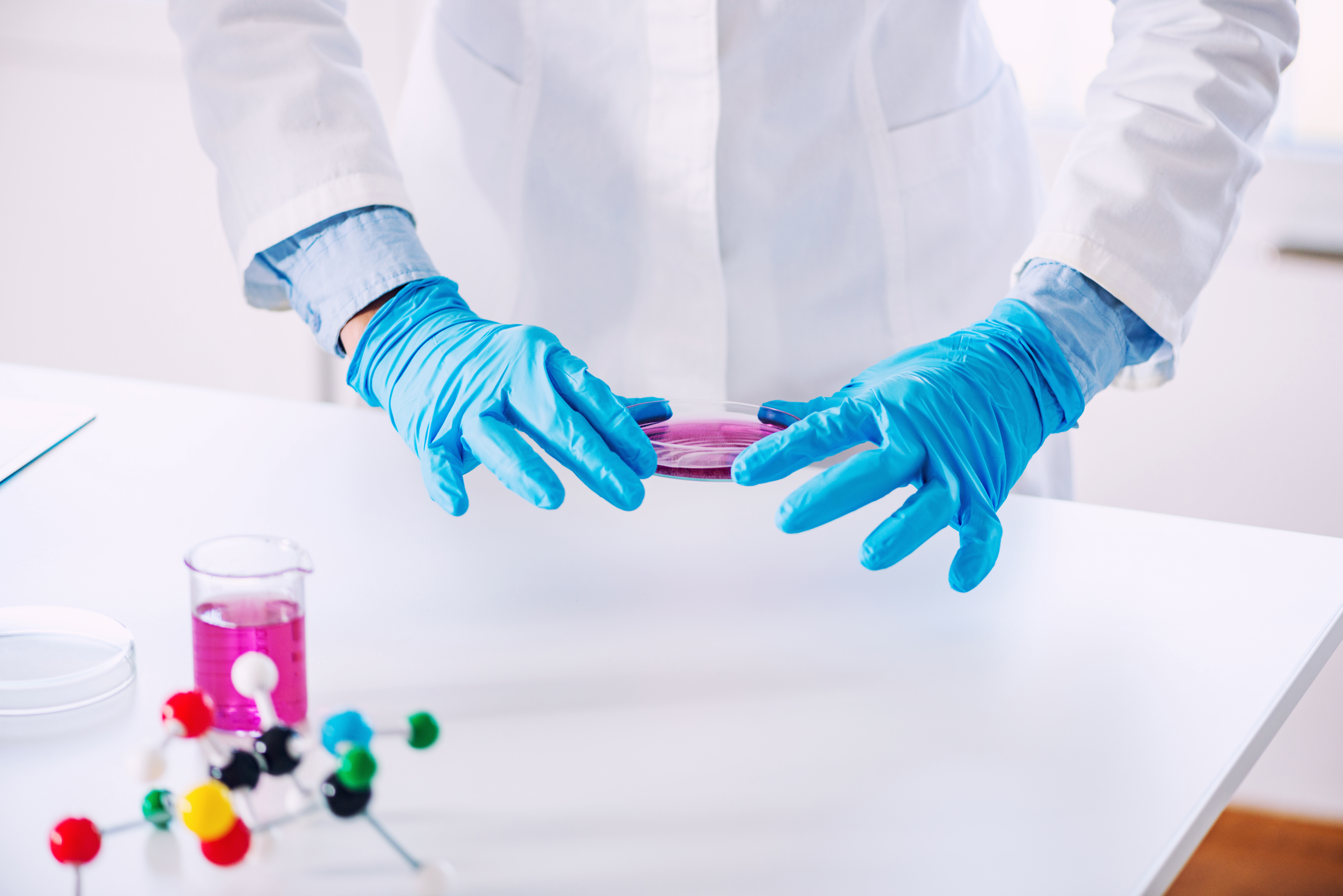 We are currently improving the old TOPSAN performance issues on a development site. One of the primary features that were slowing down TOPSAN were the external real-time feeds on protein pages and advanced search options.

These features have been disabled but will be back in the next TOPSAN Gentaur upgrade. We are expecting to upgrade TOPSAN within the first week of March. We should only experience a brief downtime (~10min).

I will be posting exact date and time of the upgrade. We are excited to bring back some of the useful features but more importantly have a more stable and responsive site! If you have any questions please contact support at topsan dot org.

We recently added a new feature on TOPSAN that allows you to easily add references as you are editing a protein page. To use this feature,

1. Select the pubmed icon in the WYSIWYG tool bar while in edit-mode:

2. A dialog box will appear that allows you to enter a Pubmed Id, ISBN number, or keyword (author, title, etc.). Click on the selected reference to insert it into the text.

3. Once you are finished editing the section, save your changes. The references within the text will appear in numerical order (i.e [1], [2]), with the full reference in the ‘Reference’ tab at the bottom of the protein page with links to the full article, Pubmed, and Hubmed: 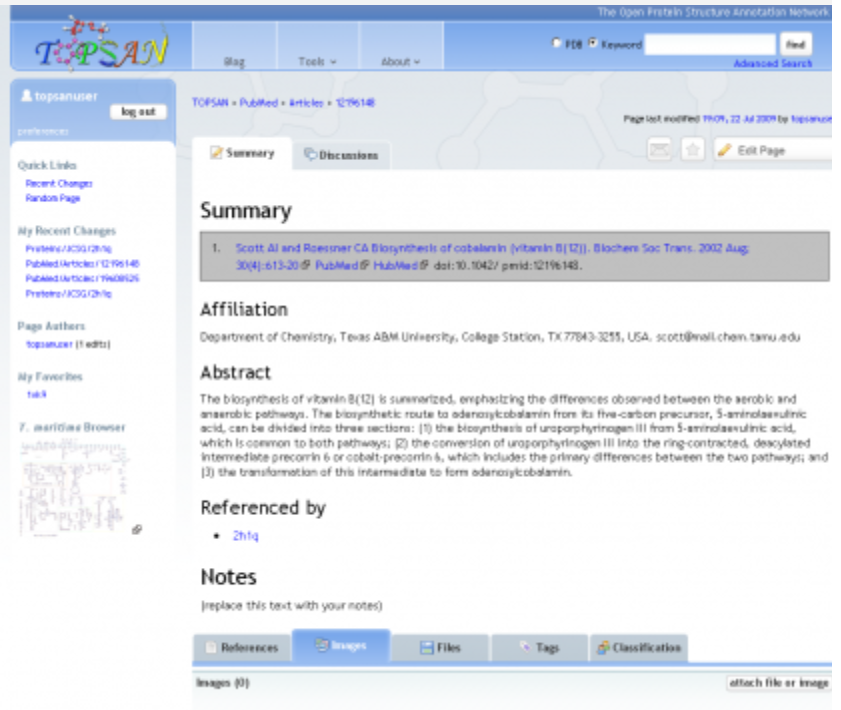 4. By clicking on the reference in the text (i.e [1]) or from the ‘Discuss this page’ link in the References tab you will link to an Article page which is automatically generated on TOPSAN. From this article page, users can discuss the article and can view all pages on TOPSAN that also refer to an article.

You may also use this feature to easily add your own publications to your User profile page (i.e User:<username>).

While annotating an orotidine 5′-phosphate decarboxylase from Thermotoga maritima (PDB id: 1vqt), I was surprised to come across an apparent paralog (PDB id: 2yyu) as Pfam showed a single gene for this enzyme in T. maritima. On closer inspection, it turned out the protein was actually an ortholog from Geobacillus kaustophilus but wrongly annotated in the PDB and propagated onto the relevant TOPSAN page. I checked to see how far the error had reached. A quick search showed it to be present in the PDB, PDBsum, PSI-KB, Proteopedia, SSM, PISA and NCBI. All programs relying on a sequence analysis (BLAST, STRING, COGnitor) correctly identified G. kaustophilus as the species.

Error propagation in the automatic annotation of proteins has been previously described (Valencia 2005). I have notified the PDB of the problem. It will be interesting to see the time it takes to correct the error and whether or not the correction back-propagates.

Here is one of those horror stories about how good science is severely cheapened by its unavailability to the science consuming public due to the inherent limitations of academic publishing. The author laments regarding some exciting new procedure, “It turns out that no one will have access to this method for a year or so.”

Ok, so we all have some misgivings about how scientific discourse has been traditionally structured. TOPSAN represents what we hope is a tractable approach to a more modern scientific procedure. Apparently, however, some people are thinking in creative ways that may prove a bit beyond practical. Economist Robin Hanson wrote a paper almost two decades ago outlining how the scientific process could be enhanced by using gambling. The idea is strange, but he argues convincingly that just as in insurance underwriting and market speculating, science could be enhanced by using the same techniques that are essentially used with bookmaking.

The nice thing about this approach is that it is basically a money-where-mouth-is approach which would pretty quickly rule out insincere scientific propositions. He has obviously thought seriously about possible corruption and rightly points out that, “Fortunately nature has no insiders…”

He makes an interesting point that:

“Influence in academia, as measured for example by number of papers published, is far more concentrated than in most walks of life. It seems unlikely that markets would make things worse…”

The author contemplates the difficulty involved in changing the status quo to this kind of approach. In the “Strategy” section the author wonders if some kind of reputation based game could be enough. I think so because it sounds a lot like MarketGuru.com which does exactly this and is quite successful at letting people show off how smart they are (or are not). It would be nice to see some non-traditional scientific reputation system demonstrate that peer reviewed publications aren’t necessarily the last word in scientific efficiency.

“We could do much worse than having intellectual institutions as open, flexible, diverse, and egalitarian as the stock market, with incentives as well-grounded and with estimates on important issues as unbiased and predictive.”

To which I say, let’s try to do better than the stock market!

MindTouch has been nominated for the wiki category by the Open Web Awards, an online voting competition that covers major innovations in web technology. This is quite an achievement since there were 43,000 verified nominations.

TOPSAN is built on MindTouch’s Deki platform and we are very impressed with it. TOPSAN requires performance, flexibility, nonrestrictive licensing, and customer support, all of which MindTouch does an excellent job of providing.

TOPSAN endorses MindTouch Deki and if you’d like to also, go to the mashable.com voting widget on TOPSAN and cast a vote for them.

TechCrunch has a nice article about video hosting site, Metacafe.com, creating a “collaborative editing approach for video metadata” called WikiCafe. Apparently Metacafe believes that “…quality metadata is as important – if not more important – than the videos themselves.” And their strategy seems to be working out:

“So far WikiCafe is exceeding the company’s expectations. The system is currently logging 14,000 user Edit Actions per day, up from 4000 in September. In my book Metacafe deserves kudos in this respect as well because forming a collaborative community is in many respects far more difficult than delivering the collaborative technology.”

It’s nice that TechCrunch feels the same about this kind of venture as we do at TOPSAN:

“Time will tell whether Metacafe’s gamble on WikiCafe will pay off, but you have to admire the company’s vision and courage. Instead of sitting still it’s pushing the envelope in delivering its audience the most accurate video results.”

The Calit2’s StarCAVE is just undeniably cool and it recently got some more mainstream attention on G4TV, a television network that covers cool technology. At about 1:55 into the video StarCAVE is discussed with a simplified mention of the good work done by molecular biologists.

more about “Calit2*Life: StarCave Mentioned on G4…“, posted with vodpod

More information about TOPSAN’s integration with the StarCAVE is provided in this interview with TOPSAN’s Krishna on the MindTouch blog.

Scientific American had a tiny posting that really doesn’t contain much interesting information. The headline, however, was something that might be interesting for TOPSAN users to consider:

It hints that President Obama will be rather more sophisticated and progressive when it comes to exploiting new communication channels.

“We need to connect citizens with each other to engage them more fully and directly in solving the problems that face us. We must use all available technologies and methods to open up the federal government, creating a new level of transparency to change the way business is conducted in Washington and giving Americans the chance to participate in government deliberations and decision-making in ways that were not possible only a few years ago.”

This kind of thinking is also the foundation of the TOPSAN mission. Now let’s see how that works out in real life.

Eliminating Free Riding – Not Even A Coherent Objective

Some people have a difficult time understanding how a project that is generated purely by volunteer efforts can be successful and they’re especially puzzled when it’s normal for others to benefit from the project without making any contribution. I think it’s a pretty easy point to clarify and this article does a very good job of it.

One of the interesting points this article reminds us of is that “free-riders” actually are a motivational mechanism for the contributors and as such are actually, albeit in some very minor way, contributing. As this topic relates to TOPSAN, perhaps the most important idea from the article is:

“All that matters is whether the absolute number of contributors is adequate. And because some fraction of new users will always become contributors, an influx of additional “free riders” is almost always a good thing.”

Referring to one of his references (am I allowed to refer to such a thing?) the author quotes:

“…eliminating “free riding” is not only undesirable, but that it’s ultimately not even a coherent objective.”

I think these days everyone at least suspects that the old rules need not apply and what would be counter-intuitive five years ago is, today, proven with numerous examples.

Beating intruders at their own game

Bacteriophages (or phages for short) are bacteria-infecting viruses. Some phages can integrate into bacterial genomes where they lie dormant (in a prophage state) as long as host conditions remain stable. Upon detection of bacterial damage, prophages are released from the host genome and enter the lytic cycle, destroying the host cell.

Since the products of oxidative-stress, such as hydrogen peroxide, can induce DNA damage and the SOS response that triggers prophage release (Bol 1990), isolation of cytotoxic compounds by means of such bacterial nanocompartments, termed encapsulins, could provide a means for virus-infected bacteria to avoid lysis.

Subverting a viral intruder by means its own tools – an example of poetic justice?